Right here in the United States we have a very special pilgrimage that happens once a year around the feast day of St. James the Greater ( July 25).

It’s unique in that it has a very special connection with Santiago, Spain.  If you have ever wanted to go on the Santiago Pilgrimage in Spain but couldn’t, well, in another way you can and it’s right here in our own back yard.  The Santa Fe Pilgrimage, about two hours west of St. Mary’s, Kansas, is one that every man and boy should walk if not once at least several times in his lifetime. The Santa Fe Pilgrimage has just as much spiritual connection as the Santiago Pilgrimage.  Since it’s inception, the Santa Fe Pilgrimage has been envisioned as a Midwestern parallel with the famous pilgrimage to the Shrine of St. James de Compostela in Santiago, Spain.  To understand this connection you need to take a look at history.  One way the Santa Fe Pilgrimage and the Santiago Pilgrimage is connected is by the Feast of St. James the Greater.  St. James was an Apostle and one of the “sons of Zebedee”, with his younger brother, St. John the Evangelist being the other; both were referred to as “the sons of thunder” by Our Lord for the fierceness for their Galilean zeal.  He is titled “the Greater” to distinguish him from St. James the Lesser.

According to tradition, when the Apostles left Jerusalem to preach the Gospel, St. James traveled to Spain and preached the Catholic Faith there.  Upon his return to Jerusalem in 44 AD, he was beheaded by King Herod also know as, Agrippa I.  Afterwards, St. James’ body was miraculously transferred to Iria Flavia in Spain and then later to the town of Compostela which is now the city of Santiago de Compostela.  This is the location where the shrine sprang up. 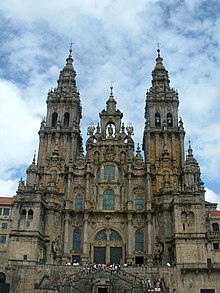 St. James the Greater is the patron of Church Militant and also of Catholic Spain and these two patronages have great meaning for the Santa Fe Pilgrimage.  One, the Church Militant are masculine members.  They have a specific civil duty to fight for the rights of Our King, Our Lord Jesus Christ, rights which are being denied by the modern world.  Two, Catholic Spain discovered the New World, the United States of America, through Christopher Columbus, a Portuguese explorer and began the work of converting it.  This is just the beginning of the connection.

Now lets take a look at the history of the Santa Fe Trail.  It starts with Fr. Juan de Padilla, a Spanish Franciscan priest who traveled north from New Compostella, Mexico with the great Conquistador, Coronado in 1542 to convert the United States of American to the Faith and was subsequently martyred for his efforts.

Just outside of Lyons, KS erected near the spot where Fr. Padilla planted a wooden cross in the center of a Quivira Indian village is a 26 foot high, granite Padilla Cross.  This majestic sight along with a mass is what the Santa Fe pilgrims end their long journeys night with.  About a days journey to the east from this cross is where Fr. Juan de Padilla was martyred by the same Indians whom he attempted to convert.

Fr. de Padilla has the double distinction of being the Protomartyr of North America and of saying the first recorded Mass (June 29, 1541) in our country.  This spot is about 1.5 miles southwest of Fort Dodge, Kansas, or about 112 miles west of Lyons, KS.  The spot is now marked with a 38 foot high concrete Coronado Cross.

Some other interesting facts about this pilgrimage is that it is 33 miles on the Santa Fe Trail.  You actually walk in the footsteps of Fr. de Padilla and Coronado himself.  The 33 miles, as you may have already guessed, represents the number of years Our Lord lived with us on earth.  Lyons, KS, where the pilgrims end their journey, is the center of the United States.  Santa Fe actually means “Holy Faith”.  Traditionally at Compostela, the scallop shell is given to those who have completed the pilgrimage to the shrine.  In the Santa Fe Pilgrimage the nail is given to represent that which Our Lord deigned to have pierce His hands and feet out of love for the salvation of souls.  If you make it to the end of the Santa Fe Pilgrimage then you are given a blessed red nail.  A symbol of your valiant efforts.  Another symbolic parallel to Compostela is the fact that the banner of Santiago, which is yellow and red with an emblazoned image of the Conquistador sword, seen above on the image of the Santiago Shell, is carried throughout the pilgrimage.  Finally, the American Flag, embroidered with the joined and crowned Hearts of Our Lord and Lady is also customarily carried and is cherished throughout the pilgrimage walk.

Annually held since 1998, the Santa Fe Pilgrimage has a three-fold purpose.  One, to effect a Catholic Reconquista of our country.  Two, to make reparation for the modern apostasy of the Church’s hierarchy.  Three, for a special intention that is given by the SSPX’s USA District Superior every year.  This years intention was for “Families”.

With so much history and symbolism a person can not deny the fact that the Santa Fe Pilgrimage is extremely special.  I ask you, gentleman, young men, and boys, pick up the nail and walk those 33 miles.  Join Jesus on the cross and in the end claim the red nail out of love for God, your country, and family.  It has never been needed more until now!  Now is the time!  We need you!!   ¡Viva Cristo Rey!!!!!

To catch more of this interview with Louis Tofari on the Santa Fe Pilgrimage join Your Morning Tradition on Magnificat Radio at Magnificatmedia.com August 3rd from 6 am – 8 am and again at 3 pm – 5 pm.  Our thanks to Louis Tofari for his contribution to this blog.